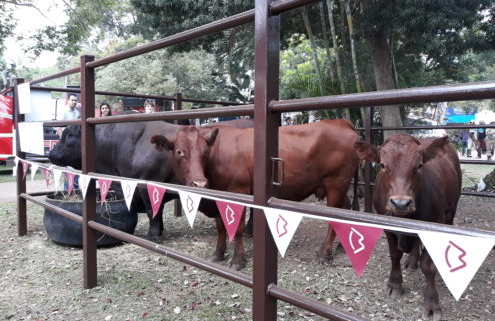 Bonsmara SA were at the Royal Show at the KZN Bonsmara Clubhouse. The week was busy with lots of visitors that came to the new and improved clubhouse. The highlight of the week was the mini farmers day held on the Teusday during the show.

Bonsmara SA and the KZN Bonsmara Club held a mini farmers day at the Royal Show in Pietermaritzburg. The day was well attended by club members, commercial breeders as well as breeders from other breeds. Nelius Ferreira from Ferrero Bonsmaras gave a positive overview on the cattle industry and some insight to their management system which helped him to be Free State Agriculture’s Young Farmer of the Year. Congratulations to all the KZN breeders that received SA Studbook Elite Awards. Jan de Jong did a practical discussion with the excellent animals that Danie Olivier from Hotvoor Bonsmaras, Vryheid has on display at the show.

Want to join the discussion?
Feel free to contribute!